Louis Weber of Englewood was one of about 180 North American gap-year students — 30 of them from New Jersey — who ran the 2.5K “Race for Inclusion” to benefit ADI (adi-israel.org), Israel’s most comprehensive provider of residential and rehabilitative care for people with severe disabilities.

“I raised $710 by asking family and friends for donations, and people were very generous,” Mr. Weber said.

About 250 runners of varied ages, backgrounds, and abilities together raised more than $14,000 at the December 29 race. The funds are earmarked for enhancing ADI’s respiratory and hydrotherapy programs at its Jerusalem and Negev campuses.

Elie Klein, ADI’s director of development for the United States and Canada, said the two facilities house more than 300 residents and 200 special-education students, and provide more than 2,000 rehabilitation outpatient treatments every month.

Mr. Weber, 18, a graduate of the Frisch School in Paramus, is a student at Torah Tech in Tel Aviv.

But like all other Israeli gap-year programs for overseas students, Torah Tech makes time for chesed projects and field trips. Earlier this year, the 24 young men in the program visited the ADI Negev-Nahalat Eran rehabilitation village. 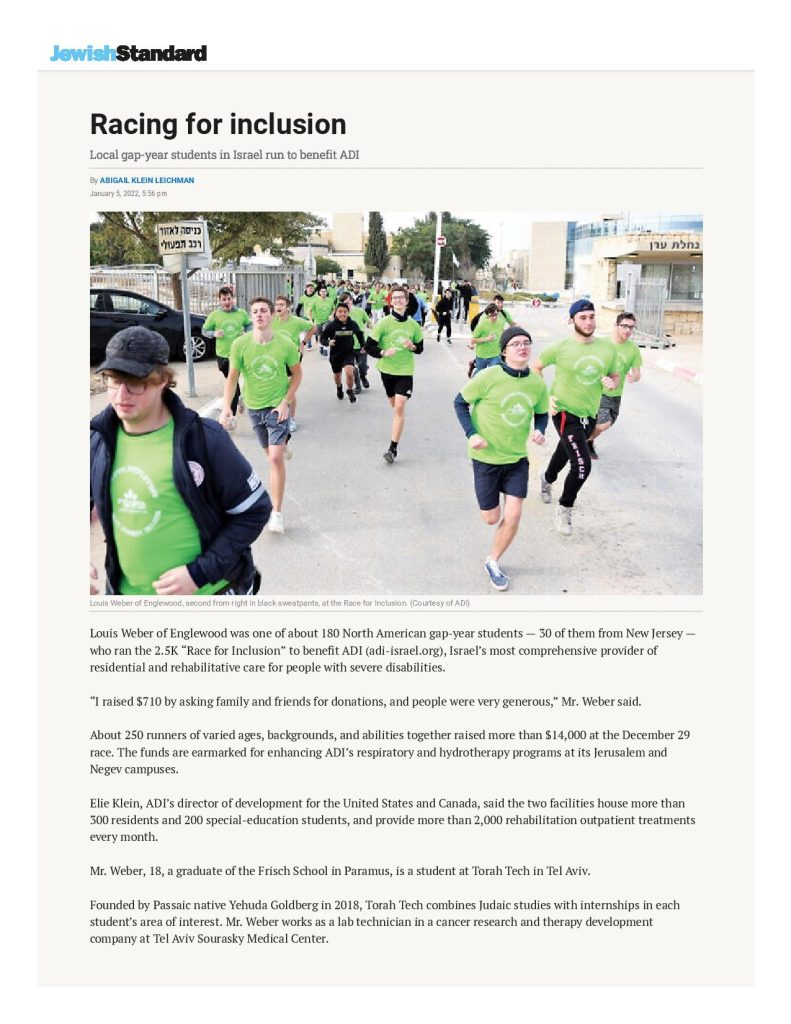 “It was a really nice experience, and about a month later Elie Klein came and invited us to participate in the Race for Inclusion,” Mr. Weber said. “Everyone accepted and tried to raise money for ADI. It wasn’t that hard; it was only 2.5 kilometers and a lot of us run and work out generally.”

He said the race at ADI Negev “was an amazing experience. It brought so many people together in support of an important cause, and the enthusiasm from all those involved was not to be believed.”

Ben Roitman, who lives in Stamford and is studying at Torah Tech this year, took home the gold medal.

Mr. Weber said that a highlight of the day was at the conclusion of the race, when everyone gathered in the 25-acre village’s accessible amphitheater for food, live music, and inspirational speeches.

“Every element of the event was incredible, but my favorite part was dancing with the residents during the concert,” he said. “It was awesome to see how much fun they were having, and it made me feel proud knowing that I did my part.”

Major General (Res.) Doron Almog, founder and chairman of ADI Negev-Nahalat Eran, thanked the foreign students for joining in the effort to raise disability awareness. He encouraged them to continue “carrying the message of inclusion and love.”

Opened in January 2006, the Negev facility is named for Mr. Almog’s son Eran, who was its first resident. Eran was born with profound cognitive disabilities and died in 2007, when he was 23 years old.

“Always remember that we are all just temporary creatures,” Mr. Almog told the race participants.

“We come one day, and we pass the next, and we need to give meaning to our lives in between. We do that by taking responsibility for one another, especially those with severe disabilities who need extra love and care.”

Talia Horn of Teaneck, a student at Tiferet in Beit Shemesh, said she will never forget the way Mr. Almog spoke about his son.

“Eran inspired him to establish the rehabilitation village,” Ms. Horn said. “You don’t hear about many parents of children with special needs creating an entire village to support other families, so that was very moving.”

Charles Lando of West Orange, who is studying at Yeshivat Torat Shraga in Jerusalem this year, said he was “extremely excited to participate in ADI’s Race for Inclusion because I had interacted with the residents earlier this year, and I feel a strong connection to this wonderful organization, like nothing I’ve ever felt before.”

Mr. Lando said he was inspired to see ADI residents and special-education students cheering the runners along the way.

“They gave me strength throughout the run and then we got to interact with some of them at the incredible party afterward,” he said. “This experience is no doubt one of the highlights of my year in Israel thus far.” Menu
ADI (formerly ALEH Jerusalem and ALEH Negev-Nahalat Eran) is no longer associated with the ALEH network in any way.  All donations for ADI Jerusalem and ADI Negev-Nahalat Eran should be made via channels explicitly bearing the ‘ADI’ name, including this website and our “Friends of ADI” offices in the US, Canada, and numerous other locations around the world.
🏆❤️ WE DID IT AGAIN! Thanks to your amazing

“I order from ‘The Ability Boutique by ADI,’

🧳🌴Enjoying your summer getaway? SO ARE WE! I