Anna Suzette Pfeiffer is a young German descendent of Nazis who is trying to make up for the past by improving the present and future.

Pfeiffer spoke to Israel National News on Holocaust Memorial Day about how she learned of her family’s dark past and about her volunteering at the ADI Negev-Nahalat Eran, a rehabilitative village in Israel’s south.

Her parents and her are part of a movement called March of Life, which started in 2007 with Germans who did research about their family histories, and which strives to fight antisemitism. 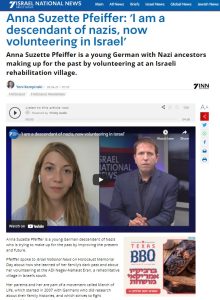 “What they found out was that their grandfathers or fathers even were rapists, murderers and thieves. And that there was a wall of silence about it,” she explains.

The group began organizing walks with Holocaust survivors and their descendants. The events became a worldwide movement, with the current marches taking place in over 50 nations to stand against antisemitism.

When Pfeiffer was 12-years old, her mother gave her a book about a Jewish girl growing up under the Nazis.

“This book helped me to understand how the Holocaust happened. Since then, my parents started to talk to me about my family history, step by step,” she says.

All her great-grandfathers were Nazis or involved in the Holocaust in some way. One of her grandfathers was a German who lived in Romania but he travelled back to Germany in order to volunteer for the SS. He participated in the murder of Jews in Poland so that ethnic Germans could resettle there. Another great-grandfather was an engineer who worked on the fences and gas chambers at Auschwitz.

She explains that her parents told her about her family history “step by step.” When she was 15-years old, she went with a group of teenagers to visit Auschwitz.

Pfeiffer explains that she feels appreciative of the way that March of Life deals with the subject of the Holocaust.

“My parents, they said, ‘Listen, you don’t have to live with the wrong guilt. You were born in 2002 and that was the life of your grandfathers. You’re not responsible for what they did.’ They did these terrible crimes which from the bottom of my heart I’m sorry for what they did to the Jewish people and to other nations. But they said you now have to take responsibility for the present and the future.”

The question of the indifference of ordinary Germans do what was occurring during the Holocaust is something she has wrestled with.

“One big issue in Germany was indifference. Many things happened in the Holocaust because people kept silent, people looked away. I cannot undo the past and that’s also now what I’m trying to do with volunteering [ini Israel]. But I can take a stand for the present and the future,” she says.

She explains that the increase in antisemitism in the last few years in Germany shocked her.

“Unfortunately, there is a lot of antisemitism and it’s increasing. Also, during the pandemic I finished school and I discovered this antisemitism in Germany and learned it was increasing in a new way, also on social media. I was so shocked and it encouraged me to become active and to do something.”

For almost two years Pfeiffer has been volunteering in Israel, living and working in a rehabilitation village for people with all kinds of disabilities. She currently works in a kindergarten with 10 kids, aged one to three, who have genetic diseases and also in a kindergarten for similarly aged children with autism.

“For me, it’s a great job. In the beginning I thought I would help the kids a lot but actually they’re the biggest teachers when its about happiness and also about patience,” she says. “I’m very happy to be able to work in Israel and to live here.”

Her parents are very supportive of her decision to volunteer in Israel.

“My parents are supportive and very proud of me,” she says. “It was for my friends interesting to see why I am so encouraged to do what I do, and it made them think about this topic and their attitude and they’re thinking about it, so it was a good reaction from them.”