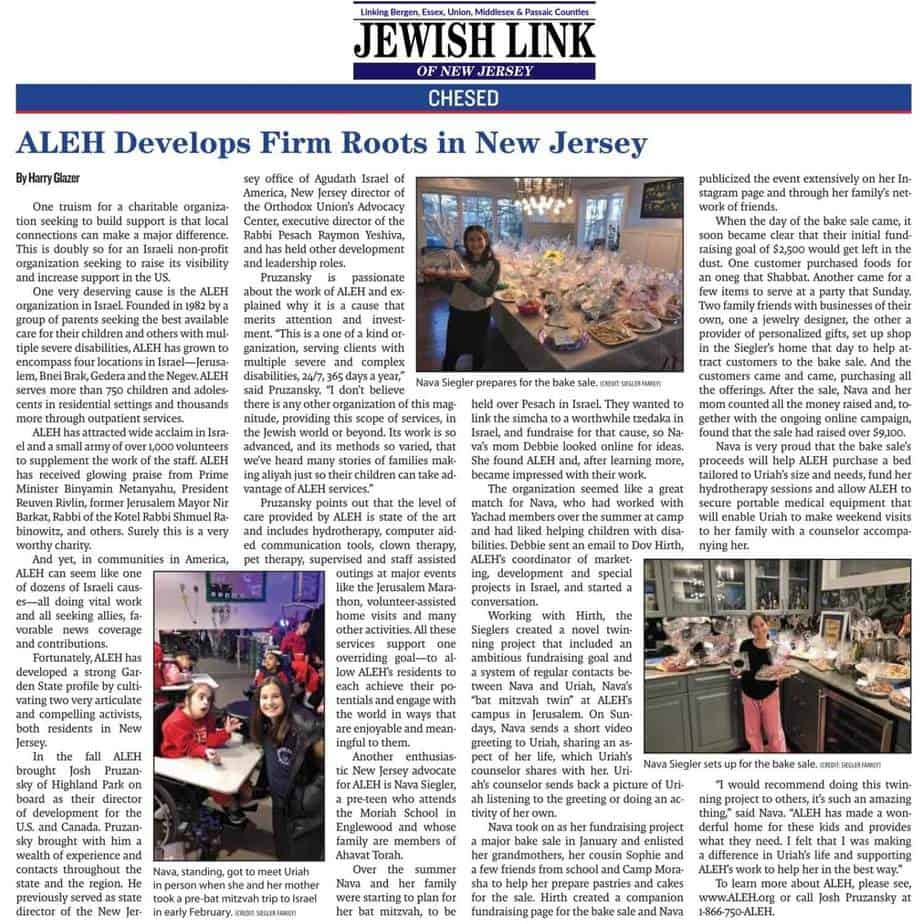 By Harry Glazer
The Jewish Link of New Jersey (JLNJ)

One very deserving cause is the ADI organization in Israel. Founded in 1982 by a group of parents seeking the best available care for their children and others with multiple severe disabilities, ADI has grown to encompass four locations in Israel—Jerusalem, Bnei Brak, Gedera and the Negev. ADI serves more than 750 children and adolescents in residential settings and thousands more through outpatient services.

ADI has attracted wide acclaim in Israel and a small army of over 1,000 volunteers to supplement the work of the staff. ADI has received glowing praise from Prime Minister Binyamin Netanyahu, President Reuven Rivlin, former Jerusalem Mayor Nir Barkat, Rabbi of the Kotel Rabbi Shmuel Rabinowitz, and others. Surely this is a very worthy charity.

And yet, in communities in America, ADI can seem like one of dozens of Israeli causes—all doing vital work and all seeking allies, favorable news coverage and contributions.

Pruzansky is passionate about the work of ADI and explained why it is a cause that merits attention and investment. “This is a one of a kind organization, serving clients with multiple severe and complex disabilities, 24/7, 365 days a year,” said Pruzansky. “I don’t believe there is any other organization of this magnitude, providing this scope of services, in the Jewish world or beyond. Its work is so advanced, and its methods so varied, that we’ve heard many stories of families making aliyah just so their children can take advantage of ADI services.”

Pruzansky points out that the level of care provided by ADI is state of the art and includes hydrotherapy, computer aided communication tools, clown therapy, pet therapy, supervised and staff assisted outings at major events like the Jerusalem Marathon, volunteer-assisted home visits and many other activities. All these services support one overriding goal—to allow ADI’s residents to each achieve their potentials and engage with the world in ways that are enjoyable and meaningful to them.

Another enthusiastic New Jersey advocate for ADI is Nava Siegler, a pre-teen who attends the Moriah School in Englewood and whose family are members of Ahavat Torah.

Over the summer Nava and her family were starting to plan for her bat mitzvah, to be held over Pesach in Israel. They wanted to link the simcha to a worthwhile tzedaka in Israel, and fundraise for that cause, so Nava’s mom Debbie looked online for ideas. She found ADI and, after learning more, became impressed with their work.

The organization seemed like a great match for Nava, who had worked with Yachad members over the summer at camp and had liked helping children with disabilities. Debbie sent an email to Dov Hirth, ADI’s coordinator of marketing, development and special projects in Israel, and started a conversation.

Working with Hirth, the Sieglers created a novel twinning project that included an ambitious fundraising goal and a system of regular contacts between Nava and Uriah, Nava’s “bat mitzvah twin” at ADI’s campus in Jerusalem. On Sundays, Nava sends a short video greeting to Uriah, sharing an aspect of her life, which Uriah’s counselor shares with her. Uriah’s counselor sends back a picture of Uriah listening to the greeting or doing an activity of her own.

Nava took on as her fundraising project a major bake sale in January and enlisted her grandmothers, her cousin Sophie and a few friends from school and Camp Morasha to help her prepare pastries and cakes for the sale. Hirth created a companion fundraising page for the bake sale and Nava publicized the event extensively on her Instagram page and through her family’s network of friends.

When the day of the bake sale came, it soon became clear that their initial fundraising goal of $2,500 would get left in the dust. One customer purchased foods for an oneg that Shabbat. Another came for a few items to serve at a party that Sunday. Two family friends with businesses of their own, one a jewelry designer, the other a provider of personalized gifts, set up shop in the Siegler’s home that day to help attract customers to the bake sale. And the customers came and came, purchasing all the offerings. After the sale, Nava and her mom counted all the money raised and, together with the ongoing online campaign, found that the sale had raised over $9,100.

Nava is very proud that the bake sale’s proceeds will help ADI purchase a bed tailored to Uriah’s size and needs, fund her hydrotherapy sessions and allow ADI to secure portable medical equipment that will enable Uriah to make weekend visits to her family with a counselor accompanying her.

“I would recommend doing this twinning project to others, it’s such an amazing thing,” said Nava. “ADI has made a wonderful home for these kids and provides what they need. I felt that I was making a difference in Uriah’s life and supporting ADI’s work to help her in the best way.”